Visitors reply Cafe Neo’s Boss – “Your Coffee is too expensive” 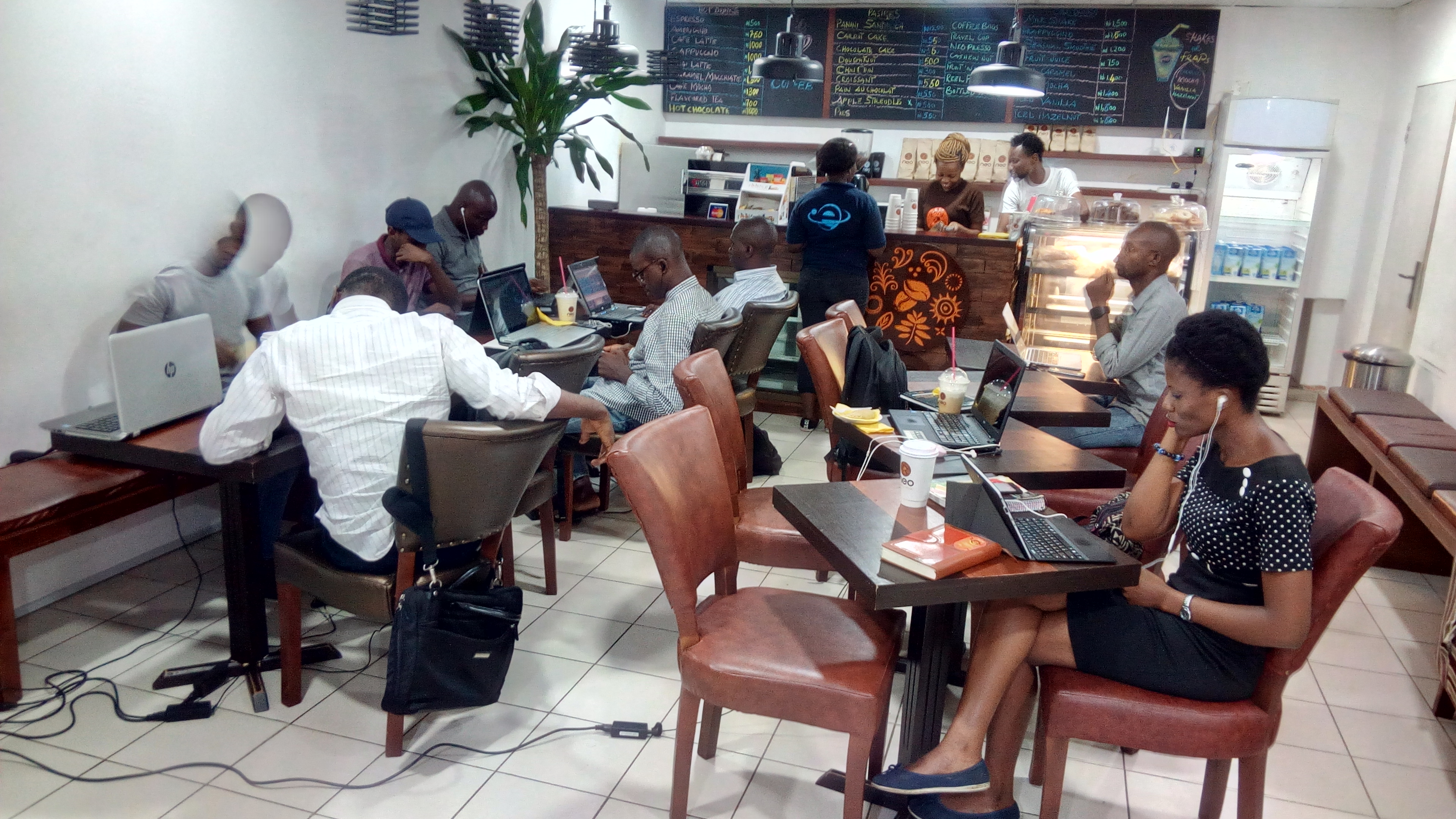 In a twist to the news published earlier, visitors to Café Neo have given mixed reactions to the complaint of the management that visitors have turned the various outlets of the coffee-selling business to free work spaces without making purchases. Mr. Chijioke Dozie, Co-founder of Cafe Neo who took to twitter revealed that he had

In a twist to the news published earlier, visitors to Café Neo have given mixed reactions to the complaint of the management that visitors have turned the various outlets of the coffee-selling business to free work spaces without making purchases. Mr. Chijioke Dozie, Co-founder of Cafe Neo who took to twitter revealed that he had once seen “17 people crowd over 2 lonely cups of coffee.”

Visitors reacted differently to this revelation on Facebook with some(many of whom are business owners too) sympathizing with the business citing that people’s attitude remain a major impediment businesses face in operating in Nigeria.

“Mr Biggs too had that issue years back. People come in for meetings and don’t order anything. Is it a cultural problem of love for freebies/lack of appreciation for value?”- one commentator had said.
Read also: Cafe Neo’s founder begs visitors, Abeg buy our coffee don’t just use our light

However, a host of other commentators (many of whom have been visitors to the cafe at one time or the other) feel the cost of items being sold at the cafe, especially coffee, is a major problem. While they acknowledge the benefits that comes with working at the cafe, they consider the price of the coffee too expensive. 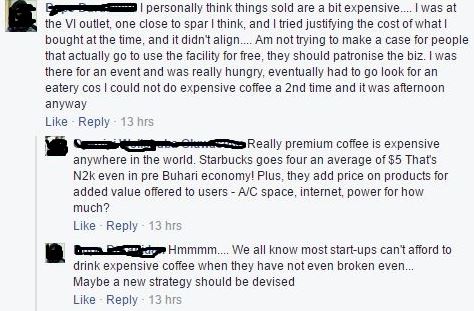 Addressing the cost of things at the cafe, the management however had in a quite humorous message to customers attributed the rise in price to the Forex problem plaguing the country in recent times. 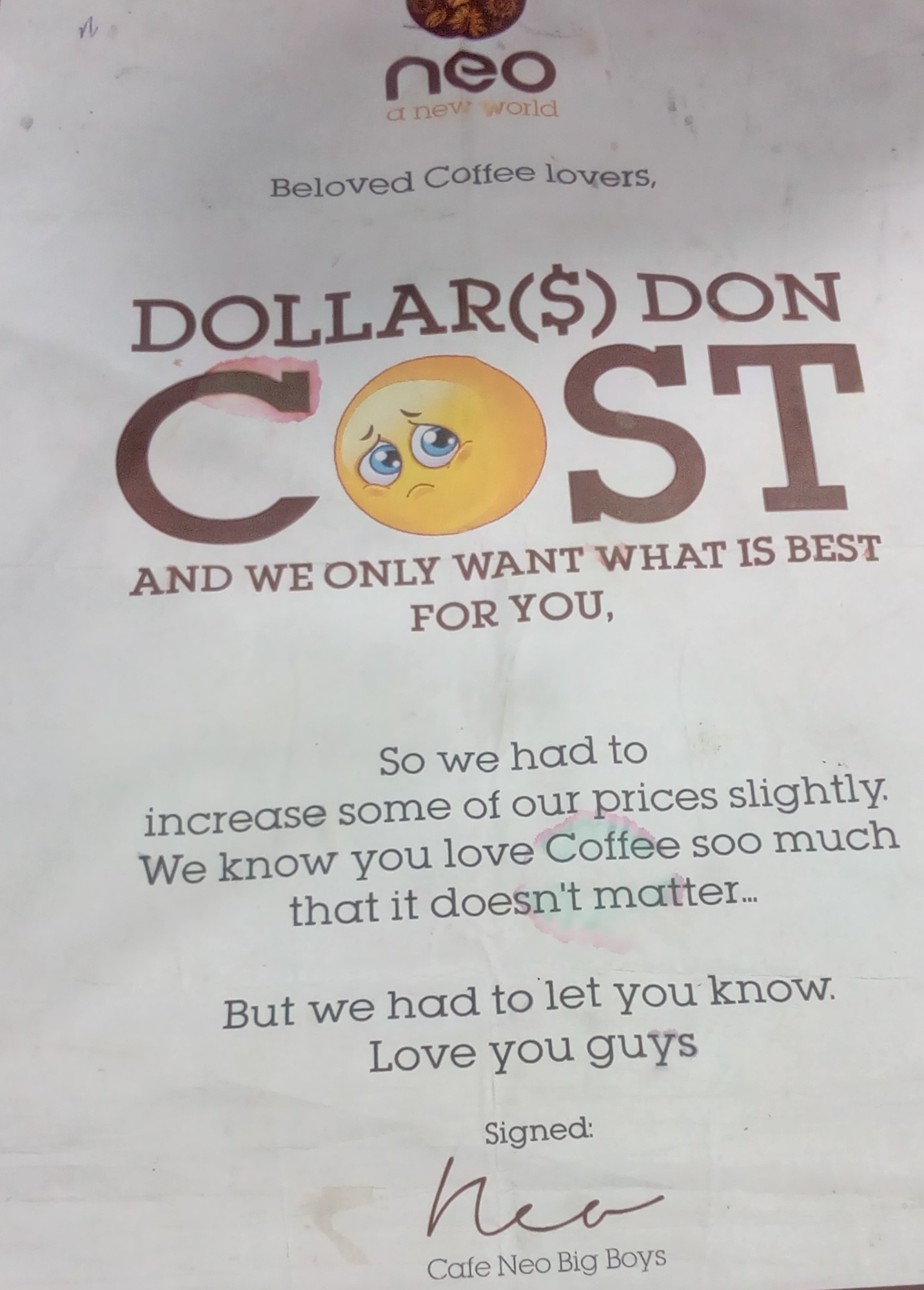 On the other hand, some opined that the management of the cafe needs to readdress it business model to one that perfectly suits the Nigerian system as they believe it is too ‘western’. One commentator said it would be brilliant if the cafe could introduce a ‘no-coffee work space package’ where members do not have to buy coffee but rather pay for using the cafe.

When Cafe Neo came in 2014, they had one mission in mind: “Dominate the coffee-vending business in Nigeria by catering Nigerians whose international exposure had ignited in them a craving for good coffee, before big names like Starbucks capture the market. With 13 outlets in Lagos (many of which are on the Island), they have so far done a beautiful job of defining their target market; the upscale. This, coupled with the fact that a cup of coffee goes for like $5 (around two thousand Naira) at big names like Starbucks shows that the  Cafe’s pricing is still very much fair.

However, the revelation by the attendants at the Yaba outlets who said customers of the Yaba outlet make more purchase than those on the Island, is an evidence that Cafe Neo has outgrown it upscale customers model. With most of the visitors at the Yaba outlet being startup hustlers trying to find a conducive work space without having to break the bank, it is only wise that the Cafe tweaks it model to cater for this teeming population. More so, a visit to the Yaba outlet by Enterprise54 reveals that many of those who patronizes the Cafe for the real love of coffee hardly sit. “They usually grab their coffee and exit”.

With an increasing population of freelancers and startup hustlers looking for affordable work space without paying through their nose, wouldn’t it be wise if Cafe Neo finds a way to cater for these ‘visitors’?