ENTREPRISE54 – In 2010, the year of the famous Al-Qaeda-linked Nigerian underpant aircraft bomber fiasco in which the White House blacklisted Nigeria for terrorism, and the aggravating mysterious disappearance of the then ailing Nigerian president Musa Yar’dua, which put over 160 million people country at the mercy of an unknown cabal, thousands of agitated Nigerian

ENTREPRISE54 – In 2010, the year of the famous Al-Qaeda-linked Nigerian underpant aircraft bomber fiasco in which the White House blacklisted Nigeria for terrorism, and the aggravating mysterious disappearance of the then ailing Nigerian president Musa Yar’dua, which put over 160 million people country at the mercy of an unknown cabal, thousands of agitated Nigerian youth took to the National Assembly, chanting “enough is enough”, pushing and shoving through a four-line security shield, in protest of the disgraceful disappearance of the then ailing president, a failed promise on a 6,000 megawatts power generation and unsatisfactory governance.

The protesters, led by activists and A-list entertainers, demanded the presence of the Senate President and the Speaker of the House of Representatives but were reportedly told the leaders had exited through a back door.

The protest, Enough is Enough, was an unprecedented campaign that announced the frustration and displeasure of Nigeria’s youth with the government. It was covered by major international press organizations, and at the top of it was a 28-year old rising Nigerian media entrepreneur, Chude Jideonwo. Deploying his youth marketing firm RedSTRAT, on social media platforms, Chude galvanized hundreds of upward mobile and tech savvy youth from the 36 states of the country to march on Abuja, Nigeria’s capital.

“A lot of people mostly know me for the Enough is Enough protest,” says Chude, who also co-founded – with Debola Williams and Debbie Magnut – The Future Awards, which the World Bank has referred to as “the Nobel Prize for young Africans.”

Though widely-acclaimed as a youth leader, Chude Jideonwo with his 10-year partner Debola Williams, is also quietly building a media conglomerate spanning traditional platforms to new media. It currently employing 52 fulltime staff, and has invested substantially in five other media start-ups.

“We have a social entrepreneurship part of us but first and foremost, we’re entrepreneurs trying to build a media business,” he stresses, garbed in his signature traditional linen short sleeve shirt and a dark pants.

“When we were seeking sponsorships for The Future Awards, clients weren’t trusting us with money because at the time (2005) I was just 19. But they kept asking us to help them handle projects to reach the youth market. That’s how the communication company came into being,” Chude recalls.

Managing an interesting day-long road interview with Chude Jideonwo in his official grey Kia Rio, in between an impressive hotel tour in Jibowu, a quick stop at Red corporate office, a Microsoft briefing, an online meeting, another postponed appointment at Lagoon Hospital on Victoria Island, a disappointing spa treatment at an Asian parlour, and a late night dinner, one is exposed to his super eventful schedule. At around 9pm, Chude pressed to schedule a meeting for 11.30pm with his accompanying business partner Mfon Ekpo, but the weary eyed lady planned to retire for the day. “Chude works too hard,” she soliloquized.

Bukky, Chude’s chubby black-skinned female aide, singularly co-ordinates the prestigious Future Awards with a beehive of volunteers. When Bukky gives an explanation for an undone task, Chude Jideonwo, famously called ‘CJ’ by his staff, looks up, rolls his eyes and sarcastically goes: “Tales… tales, my grandmother told me.” It cracks Bukky up.

Arguanly revered by the public, CJ is interestingly playful in private, and blessed with a humorous sense, mostly garbed in sarcasm. He sings melodious Christian numbers often too; a habit he acquired many years back as a children church chorister. According to him Christianity plays a major role in his life. Once, when Chude, who worships at Pastor Sam Adeyemi’s Daystar Christian Centre, had an emotional breakdown, the first response from his driver, was: “Oga! Should I take you to church?”

A sign of good fortune from God also influenced my life changing decision to draw the curtain on an eventful media content career to become an entrepreneur, Chude remarks.

“When I left NEXT (working initially as a copywriter then editorial board member) I prayed to God that ‘Lord if my business works out this year then I know you want me to be an entrepreneur. If it doesn’t, then I’m not going to do entrepreneurship again.’ That year, our PR and communications department exploded with clients! I knew God was sending me a message,” Chude shares.

A co-founder of Berlin-based Transparency International, Obiageli Ezekwesili, also has played an influential role in Chude’s developmental journey. The Ex World Bank Africa VP and former Nigerian Minister of Education is keen on developmental efforts and has been a role model to several upcoming youth. CJ mentioned her severally, affectionately referring to her as ‘Aunty Oby’. He recalls being cautioned by the ex-World Bank VP against neglecting his social entrepreneurship vision upon securing his first paid employment as a media relations manager with the defunct Virgin Nigeria airlines.

“(laughs) I hadn’t even thought of being a full-time entrepreneur at the time but Aunty Oby had envisioned it.”

At 14, CJ ventured into journalism as a youth presenter on late Levi Ajuonuma’s The Sunday Show on NTA. In 2003, while studying law at the University of Lagos, he became a researcher-turned-production manager on Nigerian television personality, Funmi Iyanda’s massive hit TV show New Dawn on 10. Working with Dr Levi and the ASPEN institute fellow Funmi Iyanda was “a very important part” of Chude’s life that helped him build important networks. In the years to come, his written pieces would feature regularly in the defunct True Love, Nigeria’s (arguably) most successful lifestyle magazine till date. Chude’s eventful career crisscross traditional media to new media, lacking only in radio.

As an undergraduate, he co-founded The Future Awards in 2005 with personal funds to celebrate young achievers and help change the narrative of Nigeria which had been defined by online fraud, prostitution and economic woes.

“I laugh when people abuse president Jonathan or say Nigeria is bad. They have forgotten how bad the country was in 2003. All you heard about young people then was how they wanted to flee the country or the females emigrated to Italy to practise prostitution. Now, Nigeria has changed,” he says.

“Who would have thought BellaNaija, LindaIkeji and other young Nigerian entrepreneurs would exist and be making so much money?”

It is very difficult to find any recognized young leader in Lagos and Abuja who has not won, been nominated, participated or supported The Future Awards (TFA). The 7-year old project has grown into Nigeria’s, and perhaps Africa’s, most prestigious youth recognition awards and has been a spring board to the careers and businesses of many of its recipients.

Olusan Olusanya, an recipient of the Awards in the Advocacy category, testified that people called her soon after clinching the award and helped her raise five million naira ($25,000).

According to Chude Jideonwo, Toyosi Akiwele, another prominent youth development entrepreneur, received an invitation to meet Michelle Obama upon receiving a Future Award. 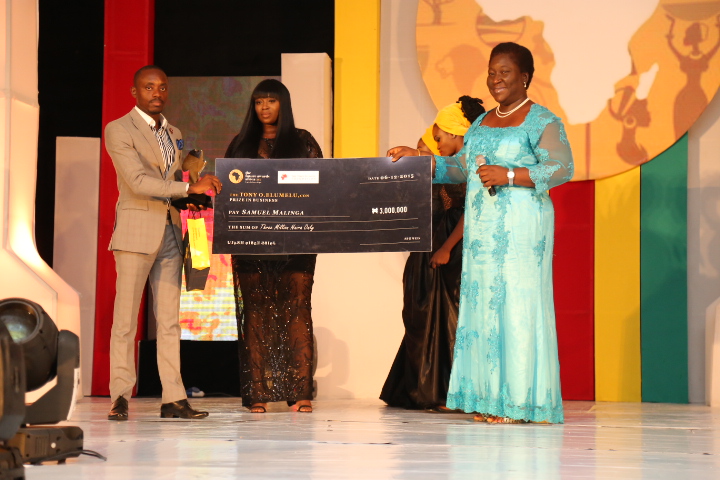 State governments have requested that the TFA team holds its award in their cities and replicate the model to trigger youth development.

“Rivers state said they wanted us to come and replicate TFA and TFESS in the state, stimulate the young people, open their imagination, bring those role models to them, generate that swell of activity that happens in Lagos, and that happens in Abuja, into Rivers state,” Chude reveals.

As for the future of the development efforts, CJ says “it’s not just about giving a prize neither is it just about doing good. It is about creating an enduring system that can even function independent of me and Debola. JCI or AIESEC, nobody knows where they are from, nobody even remembers who founded them, but they are in countries where people are taking ownership of those things and that’s our own focus; we don’t want to do something where we would have it, we would now hold it tight and then it doesn’t grow, we want to build an institution that is proudly Nigerian, but that is solving the problems of leadership and enterprise. We want to shape an enterprise across the world.”